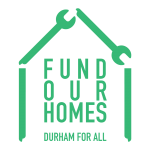 As a result of home revaluations in 2015, the average increase in home property values across Durham County was around 12% in 2016. In Black & Brown working class neighborhoods that have been rapidly gentrifying, property taxes doubled and even more than tripled.

Fund Our Homes was Durham for All’s first campaign, an advocacy campaign where we began by:

In the summer of 2016, we formed an organizing team to lead base building in Durham’s Precinct 14 in NECD and:

As a new organization with new leaders, we invested in leadership development throughout 2016 by:

Learn more about our current campaign